In a previous article, I talked about the limitations of growing up in the pickleball world as a banger, and it wasn’t pretty.

Now let’s look at it from the other side of the net. Your opponent obviously hasn’t bought into my wisdom, and he continues to delight at driving the ball at you as hard as he can. This is so annoying that you are afraid of getting badly hurt and you don’t even want to be on the court with him. Pickleball isn’t fun anymore, and that’s certainly not a good thing.

I have been in exactly this place along the way. The frustration is real. And it is even worse because you KNOW that you are actually a better player than this guy (yes, it is almost ALWAYS a guy), but you just cannot get past him.

So let’s approach this from a different angle. We cannot (and should not) eliminate the banger shot from the game. As with the lob, other players probably wouldn’t lob us (or bang at us) if we could deal with it properly. So let’s talk about how to deal with the banger.

Since the “banger defense” is a thing that you MUST learn, then let’s look first and foremost at this as an opportunity to get better. When I hit this stage in my development, I was a frustrated and unhappy loser. As I figured out how to deal with bangers, I graduated to loving the challenge. And now there is nothing I like better than walking off the court with a smile on my face after burying them.

So there are a number of things that you need to do. All of them will take some work, but as long as you are making progress, then it is a good thing.

The overall theme is that you are NOT going to participate in banger ball. Undoubtedly, you are now trying to out-hit the banger, and you wind up hitting the net or popping the ball up. Neither of which has a happy ending. So effective immediately, you will not participate in banging in any way shape or form.

Instead, you are going to start working on returning un-attackable balls to your opponents. So yes, I am going to blame you for your own misery. If you didn’t serve him big fat balls to hit, then most of your problem would go away. That makes YOU in charge of fixing this problem. So let’s get to work.

Immediately, you will start working on the following:

Get out of the way – this is the easiest one, but will take some work. Any hard hit ball that is 12 inches or so above the net is going to go out. Let it go. Watch the pros do this. You can EASILY win 5-10 rallies PER GAME that you would probably have lost if you tried to return them. Get someone to drill with you – let them drive the ball at you from mid-court or further back and LEARN which ones to let fly. This is incredibly valuable experience and will win you tons of rallies.

Push them back – if you can encourage the bangers to hit at you from the back of the court, they will almost certainly hit the ball into the net by their third shot. So you need to put that fear behind you and welcome the hard shots, especially from deep in the court. You need to learn to return these shots. Initially, just getting them back will be fine, but the key is to keep giving them opportunities to fail. When I see someone winding up to blast one, I crowd my NVZ line, bend my knees, get down low, and get my paddle up in front of me. This position helps me judge which ones to let fly, and it means that my paddle position is almost always ready to get the ball back OVER the net. Again, this one is easy to drill with a partner or a machine.

Reset – If you don’t happen to be at the NVZ line, then things can get nasty very quickly. If this is happening regularly, then take the time to figure out why. You are probably backing up because your opponent is going to hit the ball hard. But all you are really doing is giving him more space to hit it at. So suck it up and work on staying at the NVZ whenever possible. I contend that pickleball is one of the SLOWEST sports around, and wearing the occasional image of that little old whiffle ball might just be a badge of honor that you can wear proudly.

But if you do get stuck in the middle of nowhere, then you need to learn how to reset or drop the ball back into the opposing NVZ. This is the most difficult skill to learn, and one that most 4.0 players are barely able to execute. But you need to start working on it. Again, get a drill partner and work on this one. And remember that your goal is to get BACK to your NVZ.

Drop Shots – If you are at the back of the court, then you will likely have lots of time to execute a drop shot. In other words DO NOT try to bang these balls back at your opponent. As you work on an effective drop shot, you are going to pop up lots of shots and pay the price, so again, drill your heart out.

Get a soft paddle – This is my secret weapon and unfair advantage against bangers. The physics of paddle design can get pretty complicated, but the basics are pretty simple: a hard paddle gives you power while a soft paddle provides control. The ball actually stays on the face longer on a soft paddle, making it much more forgiving and easier to control the ball. This is EXACTLY what we need in order to become skilled at returning hard hit balls. Take the time to search out a paddle sold for “control”. They can be hard to find, but you will be amazed by the results. Do NOT be blinded by the “power” paddle marketing BS.

And that’s it. Not a simple solution, but certainly a number of effective strategies that will take your game to the next level. If you do not learn these skills, then you are doomed to a pickleball career of complaining how awful the bangers are. And you would be, of course, completely wrong. Take responsibility and OWN the solution.

And that’s the truth. Now go do it.

Remember - you’re just one stroke away! 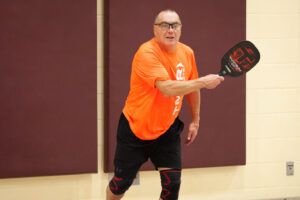 I love pickleball, and Pickleball Strokes is my on-line home. I live in Ottawa, ON and have been playing pickleball since 2012.  I am an avid instructor, referee, and 4.5 player.

I play with a TMPR Tantrum GXT paddle and I am proud to be a sponsored member of the TMPR Sports Pro team.